In my last post I described our success in finding 5 new species of Mexigonus jumping spiders in the oak-pine forest above Lachatao, but I left unexplained one of the species: purple tomato.

That great prize of the day was found by Uriel. Beating some small bushes and branches of fallen pine trees, he found some female Mexigonus that looked really interesting. We decided that it was worth trying to set the whole team looking for a male. The news soon spread: Uriel found a male, and he had figured out the species’ habitat: on exposed or dead branches of bushes or fallen trees, less than a metre from the ground, with just the right amount of sun.

The male is a spectacular creature with black and white fringes on the legs and glistening palpi. We eventually found three males and a few females. Here are photographs of the male

and of the female

The male’s biggest claim to fame, though, is the purple sheen on his jaws (chelicerae). He guards the sheen modestly as he walks around, covering it with his palpi. It’s been therefore difficult to photograph. We managed to get a male to briefly do courtship, and of course then he spread his palps to show his purple jaws to the female, modesty abandoned. Here is a screen shot from the video of courtship. You can see the shine of purple just below his eyes. 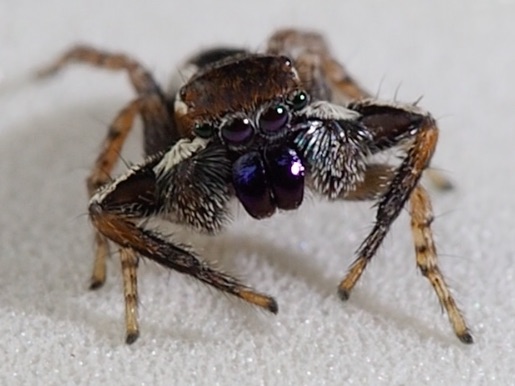 We call this species “purple tomato” because his body form suggests he is related to the bright red species I showed in my first blog post about the expedition. That species was the first one we knew of its group, and so we have started referring to all of the species of the group as “tomatoes”, whether or not they are red. The Lachatao one is just the third member of the group we know, and its jaws compel us to name it “the purple tomato”.

The Lachatao day was a spectacular way to start an expedition.