Far in the south of Mexico, in Chiapas, is a set of mountains that parallel the Pacific coast. In the core of these mountains is El Triunfo national park, a hidden treasure that takes some work to get to. We drove to Jaltenango, took a 4×4 truck for a few hours to the village of Santa Rita at about 1200 metres elevation, then hiked up through the forest to a ridge at 2100 metres (our goods mule-carried), then down to the station nestled in a pastoral valley at 1950 metres. A bed, a rustic kitchen, and electricity. In a pristine cloud forest. Heaven. 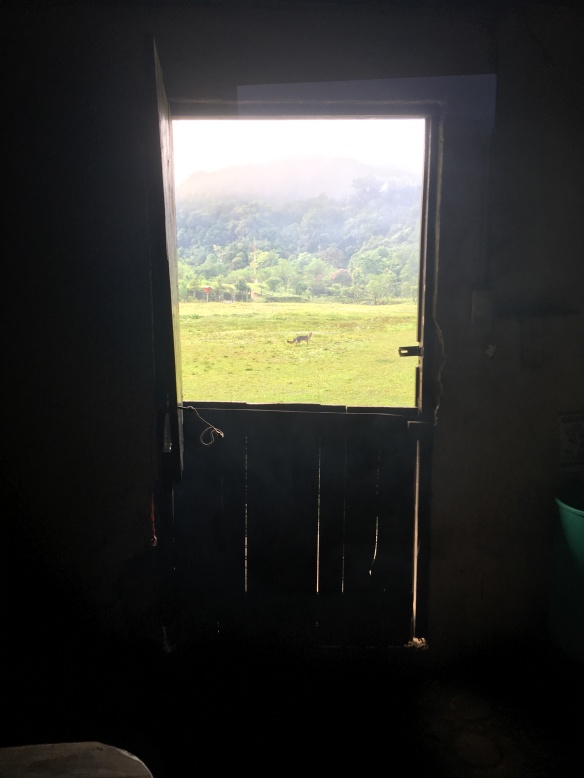 Above is the view from the kitchen out onto the grounds. You’ll notice a grey fox. There were at least four of them, rather tame, hanging around whenever there was kitchen activity. Perhaps they had learned that food was occasionally dropped, or thrown.

The grounds around the station were cleared in part by the grazing mules. One of the first things we noticed were strange accumulations of shiny blue beetles on some small plants.

Here is a movie of the beetles; it’s quite a colourful sight. Perhaps mating congregations?

It took us a while to realize there was an ecological connection between the beetles and the foxes. Here are some animal feces deposited on the ground, about the right size for a fox, and with contents that make sense for foxes.

Notice the glints of blue. I felt like I’d walked into someone’s house and discovered there was more drama than visible at first.