It’s been almost three weeks since I got back from our Mexico jumping spider expedition, and I’ll give one last post to wrap up. The trip was a full of wonderful spiders and people and places. I have already thanked some of those who helped, but I’ll repeat and add others, who helped so much: For logistics, thank you Tila, Griselda, Ricardo, Gerardo, Arturo, Jorge, Juan Pedro, José Luis, Fernando, Alex, and Janette. For sharing your salticid expertise and experience, thank you Uriel, Łukasz, Dariana, Valentina and Ellen.

I should have known the trip was going to be a success before we hit the road. At the UNAM university bookstore, as we were stocking up at the start of the trip, there was this little souvenir puma — the mascot of UNAM — labelled as a biologist, with a spider on one arm and a beetle on the other. What better omen?

No, I didn’t buy the souvenir. Why, I don’t know. I have an aversion to (almost all) knick knacks.

The photos of beautiful spiders in my posts about our #Mexigonus2017 expedition were taken with a new camera, the first I’ve had in many years. For the previous 12 years I’d taken spider photos, tens of thousands of them, with a comical ancient Pentax Optio with a hand lens glued to it. Even though it’s old and low resolution (3 megapixel), it worked for me. In order to have a hand free for wrangling the spider, I need to be able to hold the camera in one hand and manipulate it easily. I also need to take photos of dozens of specimens each evening. Standard DSLRs are too awkward and heavy, so much so that I wouldn’t be able to take photos of all the species I want to photo, were I to use a big DSLR. I’d rather have low resolution photos than none at all, and for that reason I stuck with my tiny camera for many years.

A friend’s small mirrorless Olympus impressed me, and convinced me it was time to change, and I’m so glad I did. My new camera is an EM10-Mark II, with basic 60 mm macro lens and the standard TTL flash, which I mounted with polymer clay and zip ties as shown here. It’s a compact package I can manage mostly with one hand. It took me a while to figure out the settings (manual focus, etc.), but I’m very pleased with the results. The photos aren’t aesthetically as good as those of the current generation of good salticid photographers (I don’t use diffusers, etc.), and I could improve the arrangement to reduce shadows, but the photographs serve my purposes well. On one photo of a male that was hanging upside down, I could see the shape of the embolus of his genitalia. That’s good enough resolution for me!

People who know jumping spiders know that adult males of many species look different than females. Females are usually modestly coloured, but males may have bright colours they show to the females in elaborate dances. Some commonly-seen differences, however, don’t seem to relate to courtship. In many species, the males have distinctive black and white stripes, but the stripes are on their backs, which the females don’t see during the male’s courtship. Why do the males have stripes?

One of the most handsomely striped species I’ve ever seen is an undescribed Mexigonus from eastern Mexico. We caught it during our #Mexigonus2017 expedition at Sierra Gorda national park. Uriel calls this species “tuxedo” for the fancy suit the males wear. Here it is; on the left is the male, on the right the female.

A similar male-female difference in stripes is seen in many other genera of jumping spiders, including some familiar in Canada such as Pelegrina, Eris, and Habronattus.

My best guess for the stripier pattern of males is that they move more than females. We have data from a few species of jumping spiders to indicate that males wander more, traversing a lot of territory in a day (looking for females?), while the females are relatively sedentary. An idea that’s been around for a while (e.g., look up Jackson, Ingram & Campbell 1976) is that what is good camouflage for an animal depends on how much it moves. If an animal sits still a lot, then it’s more cryptic if it’s mottled or spotted. If, on the other hand, an animal spends a lot of time moving forward, then longitudinal stripes can provide a disruptive visual effect that makes it harder for predators to see the moving animal. Hence, mobile males have stripes, homebody females not.

#Mexigonus2017 is over, and I’m back in Canada. I’m left with many memories of Mexico, strengthened friendships, great samples of new jumping spider species, and good data. As the first of a few retrospective posts here, I present The Rainbow of Mexigonus: 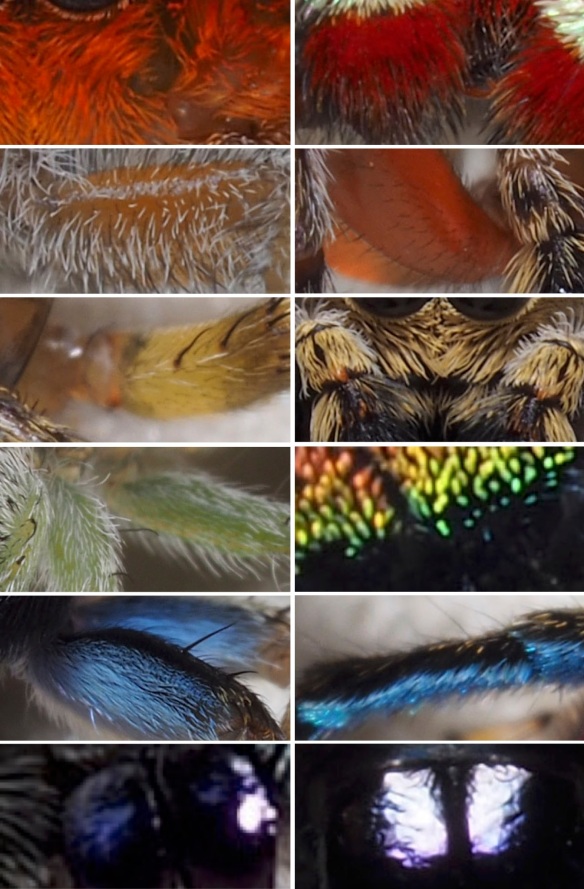 We saw the whole visible spectrum among the colours of Mexigonus. The red was intense; the orange was common; the green was delicate; the blue was stunning; the purple was unexpected. You’ll notice I didn’t mention yellow. For some reason, strong yellow is not obvious in Mexigonus adornments (except as a momentary flash in the metallic iridescence of the “quetzal” Mexigonus).

This is what the whole spiders look like, in the same sequence as the rainbow. The caption says who they are. You’ll notice that the multicoloured “quetzal” gets three appearances!

The cast of colours:

The second one down on the left side is worth mentioning — it’s an orange ghost! You may remember the green ghost from Humo Chico north of Ixtlan. When we headed south to the Sierra Madre del Sur and collected the “bell bottom pants“, we also found what we thought was the same green ghost species. But closer inspection showed it to be a different species — even fuzzier, without the white moustache, and with legs orange instead of green. Here is a better picture of him:

Mexigonus is just so diverse, and almost all undiscovered.

News from the field, thoughts bouncing around in my head, and beauty shared.